086 – What Happened on the Day of Pentecost? 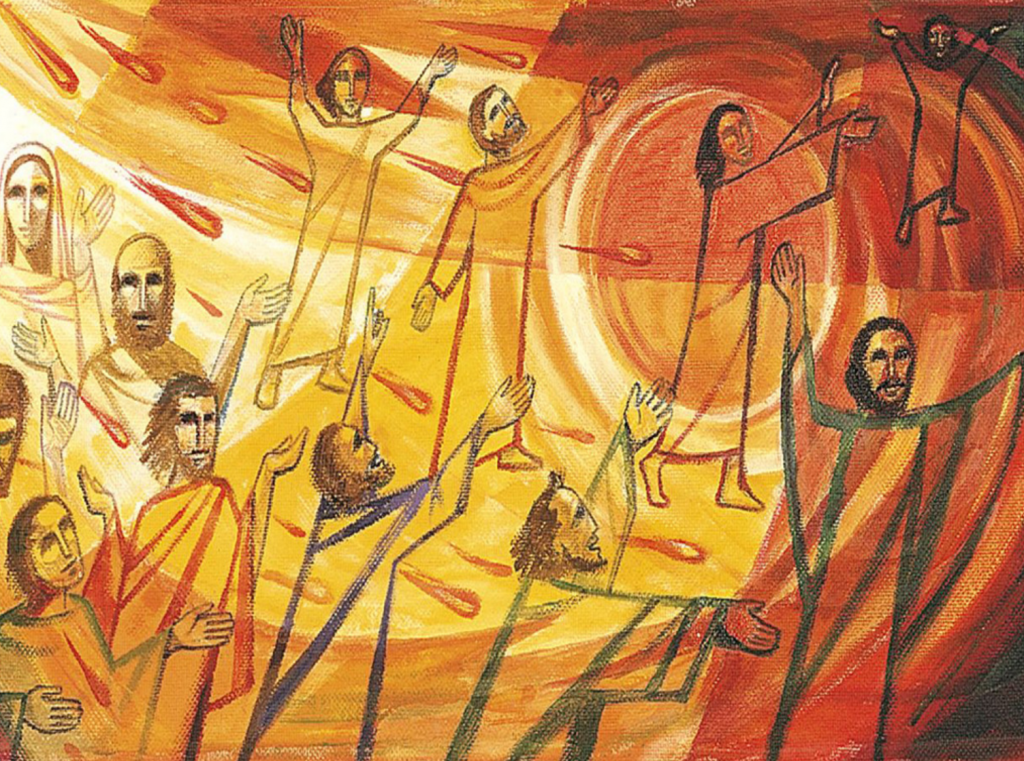 Have you ever wondered what happened on the day of Pentecost?

What would it have been like to be in the room when the Holy Spirit descended on the disciples?

What would it have been like to hear Peter preach to the crowd?

You are probably familiar with the story. Forty days after his resurrection and just before he ascended into heaven, Jesus promised the eleven remaining Apostles they would receive the Holy Spirit after he left them (Acts 1:4-8).

But he told them to stay in Jerusalem until then. Ten days later, the Apostles, and the others in the group of those who believed Jesus was the Messiah, were together when something like a rushing mighty wind blew through the house they were in.

Everyone was enveloped in a bright light described as cloven (or divided) tongues that seemed like fire. How do you put into words something you’ve never seen before?

Baptism of the Holy Spirit

The result? No, they were not burned up by this Holy Fire. Those present were filled with the Holy Spirit, and they began to speak with other tongues, in different languages.

Jews from many different countries had converged in Jerusalem at this time to celebrate the Jewish festival of Pentecost, which was 50 days after Passover.

Word got out that there were people talking in different languages. The odd thing was that these visiting Jews heard what the Apostles were saying in their own native language. People didn’t know what to make of it. Some even said the Apostles were just a bunch of drunkards. There were trolls back then too, they just didn’t have Facebook.

Peter took advantage of the moment to preach to the crowd that Jesus was the promised Messiah. About 3,000 of Peter’s listeners became believers that day. Not bad for one sermon!

There are so many things to talk about on the subject of Pentecost and speaking in tongues and it would be impossible to cover them all, so I’ll just make a few points.

First, the Apostles obeyed Jesus. They stayed in Jerusalem until they received the Holy Spirit.

You can’t live your life in disobedience to Jesus and expect to experience the presence of the Holy Spirit. Jesus said if we really loved him, we would obey his commandments.

We like to think we obey everything Jesus told us to do, but when we take an honest look at the way we treat other people, we get a pretty good picture of whether we are following Jesus or not. Just read through the Sermon on the Mount (Matthew, Chapters 5-7).

Are you merciful and meek? Are you a peacemaker? Do you love your enemies, pray for them, and do good to those who harm or slander you? Or do you judge and criticize others, condemn them if they disagree with you, and let your pride rule the day?

The problem is that sometimes what we think of as righteous and holy behavior is actually our own self-justification and self-righteousness venting itself.

It take humility to obey all of the things Jesus told us to do. We have to give up our personal opinions and our self-will. The more we obey Jesus’s commandments, the more we’ll hear Christ directing us in the specific needs of today. And then our hearts are more receptive to the descent and baptism of the Holy Ghost.

Unity in the body of Christ

Jesus told his disciples to stay in Jerusalem, and that included the idea that they would be together. In time, they would go into different parts of the world preaching the Gospel, but for now, they were to be together.

But they were not just hanging out in Jerusalem going about their separate lives. When the Holy Spirit came to them, they “were all with one accord in one place.” (Acts 2:1)

In the original Greek, the word translated “with one accord” is homothymadon. It means unanimously, of one mind.

They were not just in the same room, but they were all in accord, or agreement, with one another. There was unity in their hearts.

They had all seen the crucifixion of Jesus, talked with him after the resurrection, and witnessed his ascension. These were powerful experiences which bonded their hearts together in love for Jesus and the desire to carry out the commission he had given them.

Jesus is the Messiah

They were also in agreement that Jesus was the Messiah. They didn’t just believe it. They were absolutely convinced.

They weren’t debating theology or doctrinal points. It was enough to acknowledge that Jesus was the Christ, the Son of God. That was the simple litmus test of their faith.

Why do we make it so complicated?

Could you be in a room with ten other Christians, let alone 120, and be in absolute agreement on every point of theology and doctrine?

Oh, it’s perhaps easier if they all belong to the same church, but even that is not a guarantee.

What if you were in a room with Christians from a dozen different denominations, some of whom condemned the theology of others in the room? You would have the opposite effect from what happened on the day of Pentecost: disunity, the absence of the Holy Spirit, and no crowds in awe of and accepting your message.

That’s more like the Tower of Babel. Who wants to be part of a divisive group? Not me.

Can you set down your doctrines?

What would happen in that same room of Christians if they all set aside their doctrines, dogmas, and complex theologies, and instead could unite on the simple, original meaning of what it meant to be a Christian, to accept Jesus as the Son of God, the promised Messiah?

Now don’t get me wrong, I love a good theological discussion. I love to find out what others believe and why.

But endlessly debating the issues, trying to prove someone else wrong, and being unwilling to reexamine my own position is not productive.

There are churches and theologies that condemn as heresy anyone that disagrees with them. A lot of theological mud gets thrown at others in the name of Jesus. This should not be.

I used to be the same way. I thought I was right about how I read and understood the Scriptures and that must mean that everyone else was wrong. But that was my own spiritual immaturity and self-righteousness at work.

What if all Christians would unite on this simple truth, that Jesus of Nazareth is the Son of God, the prophesied Messiah, the promised Christ? What if we quit arguing over dogma and doctrine, rituals, ceremonies, and traditions?

If we could look past our own theological noses for a change and see all Christians, of whatever denomination, as members of the body of Christ, this unity would be fertile ground for the Holy Spirit to move upon our hearts and our churches.

This would empower us to serve the Cause of Christ more effectively than ever before and usher in a new era of Pentecostal glory for the entire Christian Church.

But Paul rebukes this attitude in I Corinthians, Chapter 12, “If they were all one member, where were the body?” (v. 19)

Imagine a giant right hand without a body. How would it function? How would it get from one place to another? The hand needs the feet and the whole body to operate properly.

When the disciples were in one place and in unity of mind, the Holy Ghost descended upon them, they began to talk in other languages. These were actual languages instead of some sort of gibberish no one could understand. People from foreign countries heard their own native tongues as the disciples were speaking.

Later in the New Testament it seems speaking in tongues has evolved into moments of personal inspiration that not everyone else can understand. There now has to be an interpreter.

Sort of the opposite from the day of Pentecost. (See I Corinthians, Chapter 14.) And so today, there are different definitions of what it means to speak in tongues.

To me, to “speak in tongues” means to speak the language of love that everyone can understand.

I know of people who speak in tongues during church and then go out and are nasty and mean the rest of the week. They are caught up in the ecstasy of the moment, but the inspiration doesn’t stay with them. Bit of a disconnect, I would say. Not everything that is called speaking in tongues is necessarily the genuine thing.

To me the proof is in what the result is. Does it follow the model of the day of Pentecost where people understand God’s message in their own language? Or is it the later model when an interpreter was needed? Both are mentioned in the Bible but if the latter was as effective as the former Paul would not have had to admonish the church for speaking in tongues that were not understood.

Peter spoke to the crowd on the Day of Pentecost

The disciples were overcome with the presence of the Holy Spirit. The crowds that were in town for Pentecost heard them speaking in their own languages.

One of the things that amazes me is how he seized this opportunity and spoke to the crowd. Of those who heard him preach, 3,000 believed in Jesus. That’s quite a sermon!

What does the Day of Pentecost mean to us today?

It’s important to be obedient to the teachings of Jesus, both individually and collectively in our churches.

What can we do to support unity in the body of Christ? To the degree we cherish and express this unity, we’ll be ready to experience more of the baptism of the Holy Spirit as on the day of Pentecost.

When you are moved and inspired by the Holy Spirit, God will also provide an opportunity to share this inspiration with others. Be like Peter and seize the occasion to let others know what God is doing in your life.

And most of all, speak to people in words they can understand so their hearts can accept the Gospel message and know that God loves them dearly.

Acts 1:4, 5, 8  ESV
4  And while staying with them he ordered them not to depart from Jerusalem, but to wait for the promise of the Father, which, he said, “you heard from me;
5  for John baptized with water, but you will be baptized with the Holy Spirit not many days from now.”
8  But you will receive power when the Holy Spirit has come upon you, and you will be my witnesses in Jerusalem and in all Judea and Samaria, and to the end of the earth.”

Acts 2:1-6  ESV
1  When the day of Pentecost arrived, they were all together in one place.
2  And suddenly there came from heaven a sound like a mighty rushing wind, and it filled the entire house where they were sitting.
3  And divided tongues as of fire appeared to them and rested on each one of them.
4  And they were all filled with the Holy Spirit and began to speak in other tongues as the Spirit gave them utterance.
5  Now there were dwelling in Jerusalem Jews, devout men from every nation under heaven.
6  And at this sound the multitude came together, and they were bewildered, because each one was hearing them speak in his own language.

1 Corinthians 14:9  ESV
9  So with yourselves, if with your tongue you utter speech that is not intelligible, how will anyone know what is said? For you will be speaking into the air.