How did Jesus heal the sick? 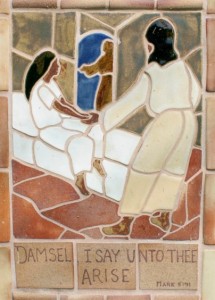 The more I study the life of Jesus,

the more I am convinced that his ministry of healing and salvation was not a phenomenon for him alone to perform, but that each person who names the name of Christ as Savior is obligated and empowered to follow in his footsteps.

Jesus expected, in fact commanded, us to follow him in all ways, thoughts, and actions, and not just say we believe in him. It’s about how we act, how we love God, others, and ourselves, how we think, how we see, how we pray.

His promise is for all time: “He that believeth on me, the works that I do shall he do also, and greater works than these shall he do; because I go unto my Father.” (John 14:12 KJV)

One of the many facets of his ministry was healing. The world has never experienced the magnitude of spiritual and bodily regeneration that Jesus brought to the world. He showed the connection between healing and salvation. And he expected us to follow his example and do even greater works.

How did Jesus heal?

This is the question we need to think about. If we are supposed to follow his example, we need to know how he did what he did.

Unfortunately, this question remains largely unanswered in a practical way for most Christians. We pray for healing and don’t always get the same results Jesus did. I must say however, there are increasing beams of light on this subject and in the healing ministry from a wide variety of Christian thought leaders, past and present.

So how did Jesus heal the sick?

There are several ways to approach this question, but I like the way Jesus summed up his life purpose to Pilate in these simple words, “To this end was I born, and for this cause came I into the world, that I should bear witness unto the truth.” (John 18:37 KJV) Everything he did was in fulfillment of this purpose. It follows then, that when he healed the sick, redeemed the sinner, and raised the dead, he was simply bearing witness to “the truth.”

And so we ask along with Pilate, “What is truth?” (John 18:38) No kidding, what is this truth that Jesus bore witness to? Can we bear witness to it as well and heal as he did? What did he see that empowered him to heal? The answer has been right under our noses for almost 2,000 years. When Jesus began his public ministry, he boldly declared this truth. He sent his disciples, first the 12, then the 70, to proclaim this great truth. But this same “truth” has not always continued to be the primary focus in most Christian ministries throughout history or today. Although there has been some wonderful progress in this area.

Just before he ascended, Jesus once more commanded his disciples to preach this mighty truth, not just to fellow Jews but to the every corner of the world and to every creature.

Once again with Pilate, we ask “What is truth?”

Think back. How did Jesus begin his ministry? With a few straightforward and powerful words he shattered the status quo of his day. It was not just an announcement, but a proclamation, a promise, and a prophecy. He declared, “The kingdom of heaven is at hand.” (Matthew 4:17, Mark 1:15 KJV) Later he even went so far as to explain that the “kingdom of God is within” us. (Luke 17:21 KJV)

It’s hard to imagine the impact these words may have had on his listeners. We’ve read and quoted these verses so many times and heard the way preachers have “explained” what they really mean, we are no longer startled as those who first heard these words must have been. Unless… we really stop to ponder in prayer and fasting what those words actually mean.

The kingdom of heaven is at hand

Let’s examine this bold statement. Jesus says the kingdom of heaven is at hand, here and now. For Jesus to have said it, he must believe it himself. For him to believe it, he must have seen the actual kingdom of heaven as being present. For him to see it, God must have shown it to him. He preached only what God told him to, “all things that I have heard of my Father I have made known unto you.” (John 15:15 KJV)

So what is the kingdom of heaven anyway? There are so many “answers” to this question in books, sermons, podcasts, blogs, and Bible studies. Some take the description in the Bible literally and see streets of gold and great big pearly gates. For me and many others, these descriptions are metaphors for the glory, holiness, and majesty of heaven.

I always come back to the description in Chapter 21 of Revelation. “And God shall wipe away all tears from their eyes; and there shall be no more death, neither sorrow, nor crying, neither shall the be any more pain: for the former things are passed away.” (Revelation 21: KJV) And we also learn that “there shall in no wise enter into it any thing that defileth, neither whatsoever worketh abomination, or maketh a lie.” (Revelation 21:27 KJV)

There is no sin or sickness, disease or death in the kingdom of heaven. There is no pain, no sorrow. Not one of Satan’s lies, no abomination, nothing defiled can enter. In this realm of God’s absolute supremacy the ills and weakness of the flesh cannot and do no exist.

Now where did Jesus say this kingdom of heaven is? Exactly! It is at hand. It is here. It is within us.

When was the last time you contemplated the implications of this great truth, the truth which was the keystone to Jesus’ ministry? We should all do it more often.

How did Jesus heal? He bore witness to the truth. What truth? The truth, the great spiritual fact, that the kingdom of heaven is at hand and within us.

To the degree that you and I admit as possible, understand, and accept this conscious awareness of the kingdom of heaven as a present reality and not just off in the future somewhere, we will begin to actually bear witness to this truth, which heals the sick and helps to reform the sinner just as Jesus did. And we will fulfill the prophecy that we would do the works he did when we believe on him.

Does this seem too good to be true or too impossible to achieve? That’s exactly what the material world wants you to think. But it’s time to follow Jesus.

When Jesus arrived at Jairus’ house where the crowd was weeping and wailing over the death of his daughter, Jesus bore witness to the truth. He said, “Weep not; she is not dead, but sleepeth.” (Luke 8:52 KJV) Jesus knew there were no tears or death in the kingdom of heaven. He walked into the room where the child was with the full awareness of the fact that the kingdom of heaven was at hand and that no death could exist there. He walked right up to her, took her hand and told her to get up. He saw her as always alive. He knew she was not truly dead–not from the perspective of what’s true in heaven. Those around him were bearing witness to what appeared true in the material world, the outward appearance of things. Yes, from earth’s perspective, she had died. But Jesus saw beyond that picture. He saw what was true at that very moment in the kingdom of heaven.

When the neighborhood kids come to your door at Halloween disguised as ghosts or some superhero, you are not fooled for one second that there is a ghost at your door. You are not in awe of the mighty strength, although you might pretend to be, in the foam muscles of Superman’s costume. You know these are only costumes. But you play the game.

What if someone came in a costume covered with ketchup to look like blood? You wouldn’t be tricked into believing it was real. Because you would see through the costume to the kid underneath just having fun.

This to me is a pretty good metaphor of how Jesus healed. When someone came to him “disguised” as a lame man, a woman with an issue of blood for 12 years, or a man born blind, Jesus could see right through the outward appearance of things that the material world presents and bore witness to what is always true in the kingdom of heaven. He “took off” their “costume” and they were healed.

This same spiritual vision redeemed the sinner as well. When a palsied man was brought to him for healing, Jesus discerned it was not just the physical disability that needed healing, but also a burden of sin. He said to the man, “Son, be of good cheer; thy sins be forgiven thee.” (Mathew 9:2 KJV) Jesus knew, bore witness to the truth, that there is no sorrow in the kingdom of heaven and so he could see this man was entitled to being cheerful. He also knew that no sin exists in heaven. He saw that heaven as present and could forgive the man’s sins. Notice, he did not say, “thy sins will be forgiven at a later time, after I die on the cross.” The man didn’t have to wait for some future kingdom. He was healed of his debility as well as forgiven for his sin.

We’re talking about a heaven that is at hand, right now

The human mind, ecclesiastical  traditions, man-made dogmas and doctrines will stoutly disagree with this idea that heaven actually is at hand and that we can heal like Jesus when we bear witness to it as he did. They have argued for centuries that heaven is way off in the future and that we cannot experience it until after we die. I can see why they say those things. We will never see it with the five physical senses. Paul makes it clear that

Eye hath not seen, nor ear heard, neither have entered into the heart of man, the things which God hath prepared for them that love him. But God hath revealed them unto us by his Spirit.” (I Cor 1:9, 10 KJV)

We can only bear witness to the truth, we can only see the kingdom of heaven at hand, as a result of God revealing it to us by the Spirit. The human mind just cannot conceive of or perceive such glory, even though it is right here.

I believe this is how Jesus healed the sick and the sinning and raised the dead. He saw a spiritual reality that he wanted us to see as well.

Are you struggling with some challenge right now? Take a few minutes right now and ask God to reveal this kingdom of heaven that Jesus said is at hand. Ask Him to open your eyes to see what Jesus would see. Just to be clear, I’m not talking about “visualizing” it. That’s just trying to conjure it up with the human mind. That is completely different from God revealing it.

The kingdom of heaven is at hand. Father, we believe your Son Jesus. Open our eyes to see Your kingdom here and now.