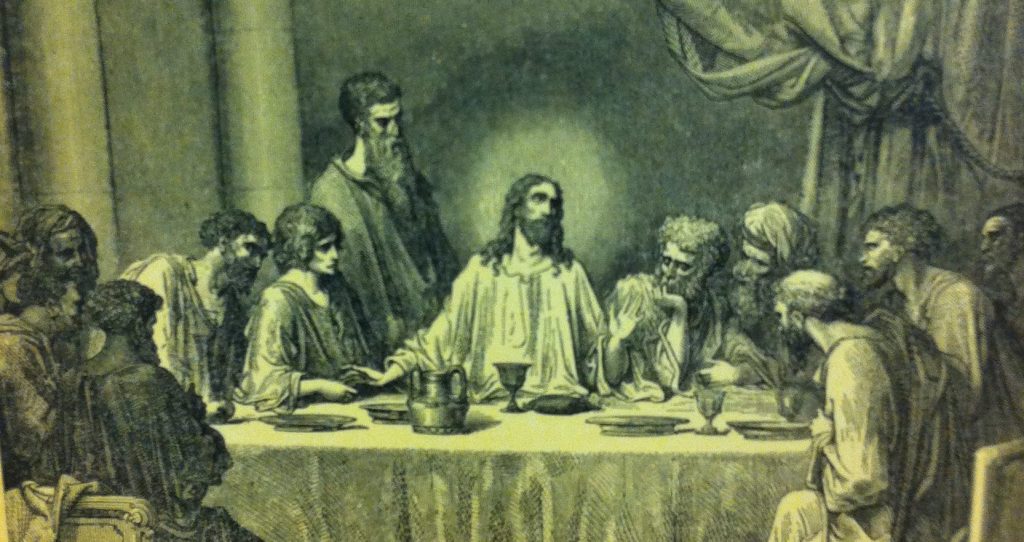 It is expedient for you that I go away: for if I go not away, the Comforter will not come unto you: but if I depart, I will send him unto you.”
Jesus to his disciples, John 16:7

His disciples did not want Jesus to leave them, but he said it was necessary. So, they had to let him go. And so do we.

At first glance, you might think this just doesn’t make any sense. But let me explain what I’m talking about.

There are several times in the Gospel accounts when Jesus rebuked his disciples for their lack of faith. That must have been hard enough for them to deal with, but these rebukes were often in the context of Jesus trying to prepare them for when he would no longer be with them.

Remember when Jesus was asleep on a pillow at the back of the boat when a storm came up? His disciples were so scared they thought they were going to die. You would think that having Jesus on board would have been a little more reassuring than it appeared to be. Not thinking they could do anything about the storm, they woke him up. Once Jesus stilled the storm, he rebuked the disciples’ lack of faith, “Why are you so fearful? How is it that you have no faith?” (Mark 4:40)

It’s almost as if he had said, “Why didn’t it occur to you to have faith that God would protect you. Why do I always have to do everything for you? You could have stilled this storm just as I did if you had exercised your own faith instead of relying me to do it.”

Another time Jesus rebuked his disciples’ lack of faith when they failed to heal a boy who was having seizures. The boy’s father had asked them to heal his son, but they were not successful. You have to remember that these same disciples had gone out healing sickness and casting out devils as they preached the Gospel of the kingdom of heaven. The father had reason to believe they could heal his son. But they could not.

Jesus shows up at just the right moment, as he usually does. But before he actually heals the boy he has some pretty harsh words for his disciples, “O faithless and perverse generation, how long shall I be with you: how long shall I suffer you?” (Matthew 17:17) Or perhaps: How long do I have to tie your shoes for you? I’m not going to be with you forever to do your work for you. You have got to learn to have more faith in God and your own spiritual abilities.

In both of these situations, the disciples were depending on Jesus personally to save the day. And he did. But he made the point that he would not always be with them in the flesh to solve their problems. They would have to learn how to use their own faith and not use Jesus as a crutch.

Have we made a golden calf out of Jesus?

Jesus wants us to love him and to follow him, to obey his commandments and do what he did. He wants us to perceive that he is the Christ, or Messiah, the Son of God. But he never asks us to worship him. He said emphatically that the true worshipers shall worship the Father in spirit and in truth. (See John 4:23) He did not ask us to pray to him. He taught his followers to pray to the Father. (See Matthew 6:9)

In fact, he goes so far as to say to his disciples not to ask or pray to him, but to pray to the Father in his name: “ye shall ask me nothing… Whatsoever ye shall ask the Father in my name, he will give it you. … and I say not unto you that I will pray the Father for you: For the Father himself loveth you.” (John 16:23, 26, 27)

Jesus is teaching them, and us, not to depend on him personally, but to go directly to God in our prayers. We have a direct relationship with God through Christ. You might even say Christ is our relationship to God. But it is God, not Jesus, we are to rely on, turn to in need, and pray to.

At the Last Supper, when Jesus’ trial and crucifixion were just around the corner, he was preparing his disciples for all that was about to happen. He said he was going to leave them. This was not what they wanted to hear. It made them sad. Up until this point they had depended on his personal presence to reassure them, to save the day. But Jesus makes a remarkable declaration, “It is expedient for you that I go away: for if I go not away, the Comforter will not come unto you; but if I depart, I will send him unto you.” (John 16:7)

After his resurrection, Jesus took 40 days to prepare his disciples for his final departure. They really didn’t want him to go, but there was no way to stop him. They had to let him go. They had to let go of him. But he had promised what would soon come to pass. In a mere 10 days after his ascension, they received the Holy Ghost on the day of Pentecost.

The personal Jesus had to leave before the Comforter could come or the disciples would still be relying on Jesus personally instead of what he taught them.

So today. If we are clinging to the personal Jesus, we will not mature in our faith. When you’re a kid, your mom will tie your shoes for you. But at some point, you have to learn how to tie your own shoes. When our faith is new, we may lean on Jesus. But as we mature in our faith, Jesus weans us of this tendency. He wants us to lean completely on God, just as he did. Hew wants us to follow his example and put his teachings into practice in our daily lives.

Perhaps the reason we don’t experience more of the Comforter or the Holy Spirit in our lives, both individually and collectively, is because we have not let go of Jesus but still cling to him to personally solve all our problems. Jesus wanted us to imbibe his teachings. He tells us to eat his flesh and drink his blood. This doesn’t mean his literal flesh and blood, but to eat up the truth he taught and drink in the spiritual essence of his message, who he is, and the sacrifice he made for us. He wants us to make his teachings our own by living them, not just be his groupie.

Many Christians think of Jesus as their “personal Lord and Savior.” But this phrase is no where to be found in Scripture. Yes, Jesus is our Lord and Savior, but he is more of a non-personal Savior, or rather a spiritual Lord and Savior. The word “person” in Greek actually means character. So in that sense, it is the character or nature of Christ which saves. But in the sense of Jesus as a human being, physique, or physical presence, the person of Jesus is not our Savior. I know, this can be a game of semantics. I hope you’ll take the spirit of what I’m getting at here.

From the Day of Pentecost forward, Jesus’ disciples learned to trust God more. They didn’t have the physical presence of Jesus as a person to reassure them and clean up after them. Now, they practiced what Jesus had taught them. They boldly followed his example in preaching and healing because they felt the spirit of Jesus, or the Christ, with them, guiding and protecting them.

Trust what you have learned from Jesus. Let go of any tendency to lean on him personally. Instead, practice the principle of what he taught. Your faith will mature and you will feel more of the Holy Ghost’s influence in your life.

What does it mean to you to follow Christ? I’d love to hear your thoughts in the comments below.