155 – Aramaic in the New Testament with Roy Gessford

What can we learn from the Aramaic in the New Testament?

In this week’s podcast episode, I talk with Roy Gessford about the insights we can get from reading the New Testament translated from Aramaic.

Here’s a summary of some of the things we talked about.

I asked Roy what got him interested in studying Aramaic?

It all started when a speaker at a Bible conference talked to him about reading the Bible in it’s original languages. He started studying Hebrew and then Greek as well.

Original language of the Bible

Once he started studying the original Hebrew, the Bible came alive to him. It helped him engage with the text and the message.

Roy says the Bible speaks to each person wherever they are. In group Bible study, he learned, especially from the female Jewish rabbi who was teaching him Hebrew, that everyone saw the Bible from different perspectives than he did. It broadened his understanding of the Bible.

Roy is grateful for all the new Bible translations coming out today. He points out that the translators bring their own perspective to their translations. It’s important to know who the translators are and who the publisher is, just so you know what is being brought to the table in a given translation.

He points out that almost all Bible translations is the work of male translators. He feels women will bring a better balance to this work.

He thought Aramaic was a dead language

His first research said it was a dead language. But he quickly learned it was not.

He found a video of Dr. Rocco Errico reciting the Lord’s Prayer in Aramaic. Roy called him and found out he was teaching classes in modern day Aramaic. He jumped right in. He moved to San Diego, CA just to learn the Aramaic language, for about 9 years. Dr. Errico was a native speaker.

It opened his eyes to reading the Bible in a new way, because he started to understand the cultural contexts of the stories from the Bible.

Once Roy got into the Aramaic language, it gave him a context for greater understanding. For example, he had a concept of bread like a loaf of American bread. When he was in Iraq, he would go to the market and buy bread. It was a small individual loaf, that if it was no longer fresh, it could have easily looked like a stone.

The reference to the devil tempting Jesus to turn the stones into bread was in this light. The stones could have been similar in size and shape to one of these small individual loaves of bread.

Aramaic is the oldest language spoken in the world today. There are close to 150 different dialects of modern day Aramaic. It is not at all the same language from Bible times.

Roy doesn’t really consider himself fluent in modern Aramaic, but he can read and understand Biblical Aramaic. “If Jesus walked in the room,” I asked him, “would you be able to talk with him?”

It is easy to see this when there are specific Aramaic texts included in the Greek New Testament. ONe example is when Jesus tells Jairus’s daughter to get up.

The phrase talitha, cumi is Aramaic and has been preserved because they are the actual words Jesus spoke.

The Aramaic translation is called the Peshitta

The translation from Aramaic that is available was translated by George Lamsa. He was a native Assyrian and Aramaic speaker.

Roy said that thebible.org has Lamsa’s translation. (But I could not find it.) Here are some reprintings of his translation on Amazon.com*.

On the site noohra.com there are various recordings you can listen to. Here’s one of the Lord’s Prayer in Aramaic.

Roy said that when he first started reading Lamsa’s translation, he didn’t see much difference between that and the King James version.

The Aramaic shlama which is similar to the Hebrew shalom, has a much more complex meaning than just peace.

I asked if there was another example where the Aramaic shed fresh light on the Scriptures.

Word play with the word sheep and lambs

He mentioned that the time Jesus was talking to the disciples at the Sea of Galilee after the resurrection. The Greek text has different words for love. But in the Aramaic, the words for sheep are different.

He explains that one time the word refers to lambs. The second time, the word is rams, male sheep. The third time it refers to ewes, the female sheep.

To him this means Jesus wanted Peter and the disciples to minister not just to the men, but women disciples as well, along with the lambs, those new to Christ.

There is an all-inclusiveness to take care of everyone.

The Lord’s Prayer in Aramaic

What does the Aramaic teach us about the Lord’s prayer. In King James, it says, “They will be done in earth as it is in heaven.” (Matthew 6:10) But in the Aramaic, it says, “Let they will be done as in heaven, so on earth.” This may seem a minor difference, but putting heaven first is more emphatic that we start with heaven in our prayers.

Jesus always talked about heaven being at hand instead of something far off.

Roy points out that more people are getting interested in Aramaic, mostly in the West. Some Arabic speaking countries make it illegal to speak and teaching Aramaic.

There are many ancient non-biblical texts written in Aramaic, the Epic of Gilgamesh, for example. Preserving the language is beneficial to our culture.

Where to begin with Aramaic

The best way to learn the language is in person. You can Google places if you are really interested. There are a few places around the country where you can study this ancient language.

The best place to start with George Lamsa’s translation. There are other translations. You just need to be aware of the perspective of the translator and the publishing company.

The Chaldean Cultural Center in Michigan, in West Bloomfield, Michigan, USA is a wonderful experience if you are in that area.

The benefits of knowing Aramaic

Getting to know Aramaic has helped Roy get to now Jesus better as a teacher and a healer. Learning the language of Jesus has helped him understand Jesus better and put his teachings into practice. He shared an example of healing.

He fell while hiking and was taken to the hospital. He was given three options, get immediate surgery, be paralyzed for life, or die. He said he would take option number four. They said, “What do you mean?”

He told them he would call a friend to pray for him. Two weeks later he walked out of the hospital. Just the other day, he played tennis for two hours. Studying Aramaic has helped give him confidence that the healing power of God is still available today.

I always ask guests on the podcast these three questions:

1.  If you could talk to any Bible character, other than Jesus, who would it be and what would you ask them?

Mary, the mother of Jesus. I’d ask her if she wanted to play a game of tennis, but mostly I’d just love to hang out with here because of her purity of thought.

2.  Is there any Bible character that you especially identify with?

Joseph, the son of Jacob, in the Old Testament. He had such a challenge when everything was going well, then his brothers sold him into slavery, then working for Potiphar and being falsely accuse by Potiphar’s wife and being in prison gives me much to think about.

3.  How would you describe Jesus’s orignial message of how he wanted us to live our lives?

Be radical. Jesus said, “You guys have heard this before. I’m going to tell it to you again. Now actually do it.” 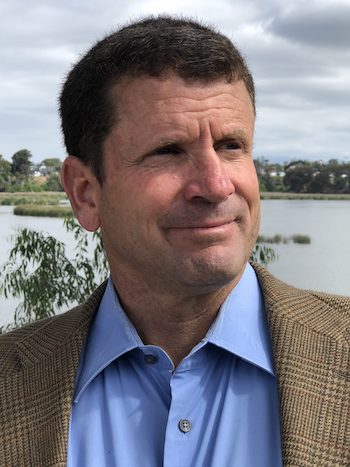 Roy Gessford grew up in California and graduated from the Univ. of CA at San Diego with a degree in Urban Studies and planning. Later he got his teaching credentials from the state and specialized in teaching English language learners.

More recently he went back to get his Masters degree from Claremont Lincoln University. His Masters thesis was a collaborative teaching effort to save the Aramaic language. He’s done graduate study in Hebrew and Greek at the Graduate Theological Union in Berkley, CA and Aramaic courses at Cuyamaca College.

Roy had a 20-year career within the tennis profession as a player, coach, referee, and tournament director. He published a book A High School Tennis Coach’s Handbook: For Players, Parents, and Coaches.

In 2012 Roy founded the Let in the Light Publishing company. He is passionate about promoting and preserving the Aramaic language and getting others interested in it as well.

James Early, the Jesus Mindset Coach, is a Bible teacher, speaker, and podcaster. He conducts Bible workshops online and in person. His focus is on getting back to the original Christianity of Jesus by embracing the mindset of Christ in daily life. Contact him here.